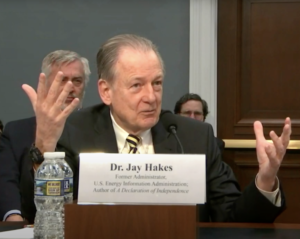 The energy crises of the 1970s have continued to shape U.S. energy and climate policy ever since, and historian Jay Hakes was part of the story. Earth911 talks with the author of Energy Crises: Nixon, Ford, Carter, and Hard Choices in the 1970s about how Presidents Nixon and Carter responded to the oil embargoes and Middle East conflicts that led to long gas lines and a focus on keeping oil prices low, often despite the potential for conflict. Hakes was the Department of Energy’s chief energy analyst during the Clinton years and served as the director of the Carter Presidential Library for 13 years after participating in the policymaking process during the 1970s.

The 1970s defined American perspectives on oil, gas, nuclear and solar energy. It was the era when oil was weaponized by the OPEC nations and early solar panel research first produced commercial results. Hakes explains how Richard Nixon’s initial response to the oil embargo on October 17, 1973, has had repercussions over many decades and how Jimmy Carter’s energy-centered foreign and domestic research agenda spurred investments in renewable energy. But the progress was interrupted in the 1980s by renewed support for oil exploration by petrochemical companies and did not recover its early momentum until the early 200s, when climate issues forced a new reality on Washington, D.C.

Tune in to a fascinating conversation. His previous books include A Declaration of Energy Independence: How Freedom from Foreign Oil Can Improve National Security, Our Economy, and the Environment. In that 2008 book, he argued that America had ignored both the threat of climate change and the challenge of weaning itself from oil for decades. Now, U.S. energy independence is growing after the rise of renewable energy generation. Now, the U.S. must rethink foreign and domestic policy to address the distributed nature of post-fossil fuel energy. Energy Crises: Nixon, Ford, Carter, and Hard Choices in the 1970s  is available now.