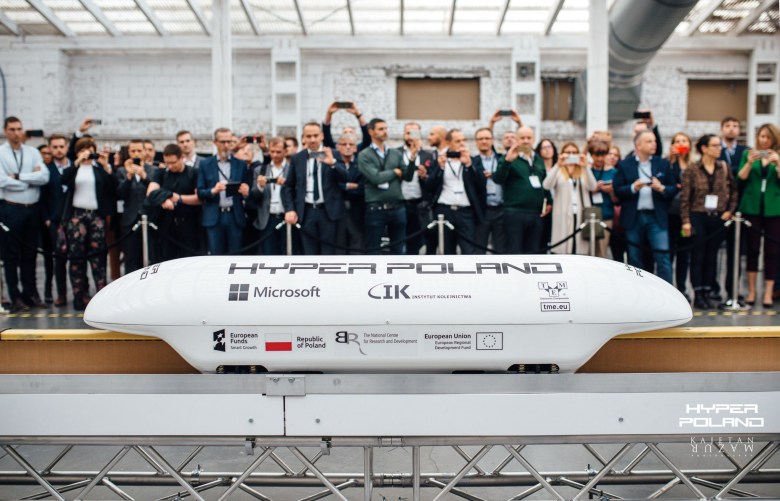 During the demonstration, the ride of a MagRail vehicle on a test track was shown. The 48-meter track was made to a 1:5 scale. The maximum speed during the test was about 50 km/h, acceleration 6 m/s2 and deceleration 15 m/s2.

MagRail is a magnetic rail system that uses existing conventional rail transport corridors. Both standard trains and magnetically-levitating vehicles can use the same railway track interchangeably.

The MagRail system can be fully integrated with existing rail infrastructure without the need to make changes to the current rolling stock. On railway lines, where trains can move up to 160 kph/100 mph, MagRail vehicles can reach speeds almost twice as high (up to 300 kph/187 mph) due to the use of magnetic levitation, electromagnetic linear motor, a special tilting mechanism, along with the relatively low height and low mass of the MagRail vehicles.

Energy costs for MagRail will be lower by approximately 13% for the speed of 300 kph/186 mph compared to conventional high-speed rail systems.

In addition, the maintenance costs for MagRail will be approximately 25% lower than for conventional high-speed rail systems, due to the elimination of friction of mechanical elements at high speeds.

Want to see Hyper Poland’s MagRail in action? Then click below to watch a 2-minute video of their live demonstration:

The original dream of the founders of Hyper Poland, was to revolutionize the way we travel. Later, as a result of a combination of talent, knowledge, determination and technology, they transformed their idea into a real project — and its prototype was on show during their presentation.

Hyper Poland is one of the beneficiaries of the global initiative Microsoft for Startups — a program supporting the most promising technology companies in the world. Hyper Poland received a grant of $120,000.

Thanks to the results obtained during the tests, it will now be easier and more efficient for Hyper Poland to design individual subsystems of a full-size system.

In the second half of 2020, at the premises of the Railway Institute in Żmigród, construction of a full-size test track of the MagRail system will begin. And to help with this, Hyper Poland received a grant of €3.8 million from the National Center for Research and Development.

Interested in finding out more about Hyper Poland and its revolutionary transport technology? Then head over to their official website.

This entry was posted in News, Transport and tagged in MagRail, Trains, Transport.