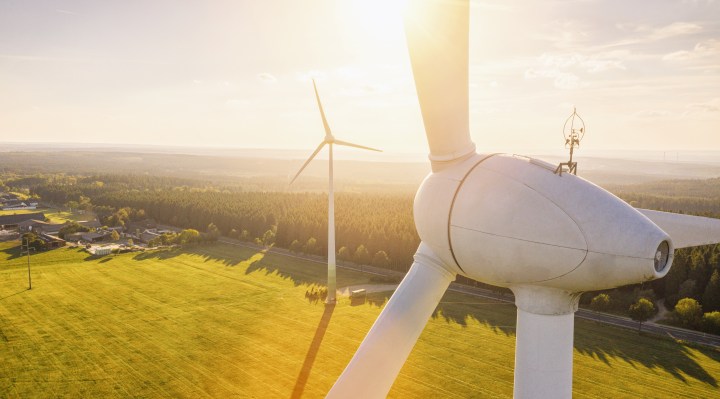 
When most people think about renewable wind energy, they imagine clean, blue skies, fluffy clouds and a well-placed lens flare as a gloss-white, mill-blade splits the sun. It is a beautiful image representing the promise of a cooler and healthier tomorrow. What I think of is, a Wedge-Tailed Eagle dipping and dodging (fighter pilot style), before a death-defying swoop, mere centimeters above a motion-blurred fan. This is when Doogie (you read that right, I’m naming my bird hero after a fictitious medical prodigy) soars to the sky at breakneck speeds and winks (just once) at the thousands of cheering fanbirds who chant his name from the stadium stands. DOOGIE! DOOGIE! DOOGIE!

Alright, that might have been a bit much, but I’ve been asked to make environmental news fun and interesting…I swear there is a point here I’ll come back to.

Wind-energy is a highly promising technology that now costs even less than natural gas, but it has its naysayers. Now, I’m a bit unusual in my field (environmentalism) because I love people who disagree with me. This is partly because I love a good debate, but I also like to be challenged. It forces me to look more closely at trusted data and observations, and often results in a more informed opinion. So, I’m going to share what I believe to be the two most effective arguments against wind energy in order to highlight why some recent developments are a pretty big-dang deal.

Argument one naysayers generally use against wind energy is the EXACT same argument I use to denounce my great grand-uncle at the annual Fourth of July barbecue, which is, we are all penalized by the natural gas backup when the wind is not blowing. This is because wind energy is an intermittent power source, which means the power is not being generated 24 hours-a-day, or at the virtual push of a button. For this reason, the renewable boom has been a very profitable venture for the dastardly fossil fuel companies, who are responsible for the extraction and production of the natural gas (usually with fracking) that powers the cell phone, with which you are currently reading this article.

Before you detach and hurl the closest windmill into the destructive path of the next, semi-automatic, 18-wheeler, please allow me to alleviate the concerns surrounding my previous paragraph. While I consider this to be a fair argument, it has the staying power of the goldfish you win with a ping-pong ball at the State Fair.

Natural gas is what we call an energy transition fuel, which is to say there is a transitional pathway from burning CO2 intensive wood and coal for energy, to creating energy with newer, zero emission technology. To get there, we will need to temporarily use energy that is not as clean as a windmill but is much cleaner than coal. So, for the time being, natural gas should be considered part of the transition plan. The answer to this argument is not to give up on windmills, it is to push for the improvement of battery tech, and to find alternative ways to store energy for those times when the wind is not blowing. A perfect example would be the idea of using hydro-electric dams as gigantic batteries.

The second argument has, by far, been the more thought provoking. So here’s the deal, renewable wind energy has had a somewhat negative effect on bird and bat conservation, because not all of them can dip, duck, dive, and dodge as well as Doogie the Wedge-Tailed Eagle (told you I’d run that back). As I mentioned before, this is actually the better argument, but it gets absolutely no attention because we environmentalists have a well-practiced counter-argument that seemingly debunks the whole thing. It goes like this:

“Yes, I remember President Trump saying the same thing about birds in a debate last year. It is true windmills kill birds, but did you know more birds were killed by cats last year? In fact, more birds were killed by windows! Should we ban windows? Should we not allow cats to do what they have evolved to do? Yes, birds die every year, but the number of birds dying from windmills, cats and windows is fractional compared to the population of birds on the planet.”

Thanks to the polarization of American politics and the sheer absurdity of birds smashing into building windows, the argument almost always comes to a crashing end (apologies to birds for that one), right there.

I am a conservationist at heart and while I accept death is inevitable and the circle of life is more than just an Elton John song, unnecessary death is… well it’s unnecessary. So I always look deeper when I find out my kind (humans) are adding to the death toll of species, even when that death toll seems comparatively minor and caused by something I love (like a renewable energy source).

Unfortunately, there is a legitimate problem here. You see, cats kill small birds, birds like Robins and Sparrows. Windows kill small birds too, but they also get some medium sized birds like pigeons or ravens, thankfully glass manufacturers are trying to address the problem. The great thing about these smaller birds is they reproduce well (Robins produce 2-4 eggs up to 4 times per year). The problem with windmills, is they disproportionately kill larger birds like hawks, eagles and falcons. These birds do not reproduce as effectively (eagles produce 1-3 eggs, only one time per year). As many of these larger birds are already endangered, I am not keen to pass off their deaths as negligible because of windows.

Thankfully, some new developments have been announced that could change all of this very soon. The first is a beautiful example of how simple solutions can often be the most elegant. In a study conducted in Norway, it was found by painting one of the turbine blades black, birds were more able to spot the windmills and avoid them completely reducing bird mortality by 72%.

Another cool development is happening in South Korea, where a company is installing 12-story vertical access wind turbines to the top of skyscrapers. This not only produces more power by being at a higher elevation (and therefore more exposed to wind), it creates energy without humankind taking up even more of the planet’s land. As an added bonus, they are also easier for birds to spot and avoid than traditional wind turbines.
If you listen to my show, The Biofriendly Podcast, you will notice Jacob and I talk a lot about the next environmental problem. As in, what is it we are doing now that will unwittingly cause a problem for the planet tomorrow. I write posts like these because many of our current solutions need further improvement or the children of tomorrow will curse us just as mightily as I hear today’s youth curse the boomers.

There is a lot of interest in the environment and I firmly believe humankind is truly interested in helping this planet, and the species it holds, more than ever. But we can’t pass off criticism of our present solutions as the political whining of a bygone generation. If instead – as they have done in Norway and South Korea – we acknowledge, research, and innovate, then maybe we can solve not only today’s environmental problems, but tomorrow’s as well. Then we’d truly have a cooler planet.